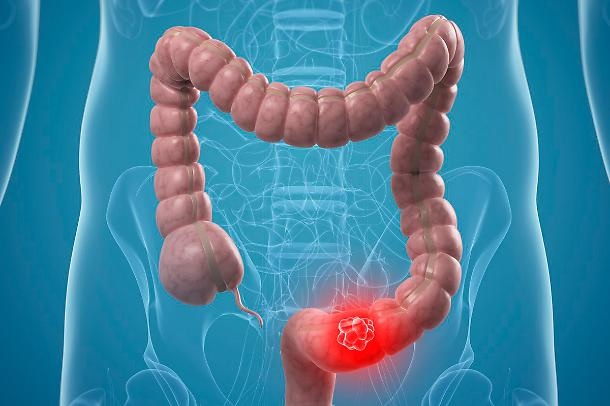 In Europe, colon cancer is the second most frequently diagnosed cancer in both sexes. The most common symptoms range from change in bowel movements (alternating periods of constipation and diarrhea) secondary fatigue to iron-loss anemia and obstructive symptoms in serious cases.

Who is most at risk

How to reduce the risk

Here are some rules for the primary prevention of colon cancer that can be adopted by the whole population:

Although the occurrence of colon cancer is high, we see a gradual reduction in mortality for both sexes. This is mainly due to the evolution of medical therapy. Chemotherapy is still the best cure that can lengthen the time for a possible recurrence after surgery on the primitive tumor and, in selected cases, lead the patient to recovery.

In recurring and/or inoperable advanced disease, the new molecules such as the anti-EGFR (Epidermal Growth Factor) monoclonal antibodies, the anti-angiogenic drugs belonging to various classes such as the anti-VEGF (anti-Vascular Endothelial Growth Factor antibodies) and small TKI molecules (Tyrosine Kinase Inhibitor), alone or in association with chemotherapy, can turn cancer into a chronic disease.

When the disease is advanced but limited only to the liver, the same drugs are potentially able to make operable what initially was assessed as a non-operable disease and, in selected cases, lead the patient to recovery.

Oncology and Food takes into consideration drugs which have been used in the treatment of pathologies.  However, we want to highlight some side effect which are often not taken into consideration by doctors and which can lead to malnutrition in the patient. The symptoms referred to are: dysgeusia (distortion of the sense of taste), iron-deficiency anemia,( fatigue caused by magnesium deficiency and mucositis). These side effects can be alleviated and/or prevented by following easy-to-apply dietary advice found on the website. This advice will complement the drug therapy recommended by your oncologist and will never replace it.

Send a mail
Contacts
Support us